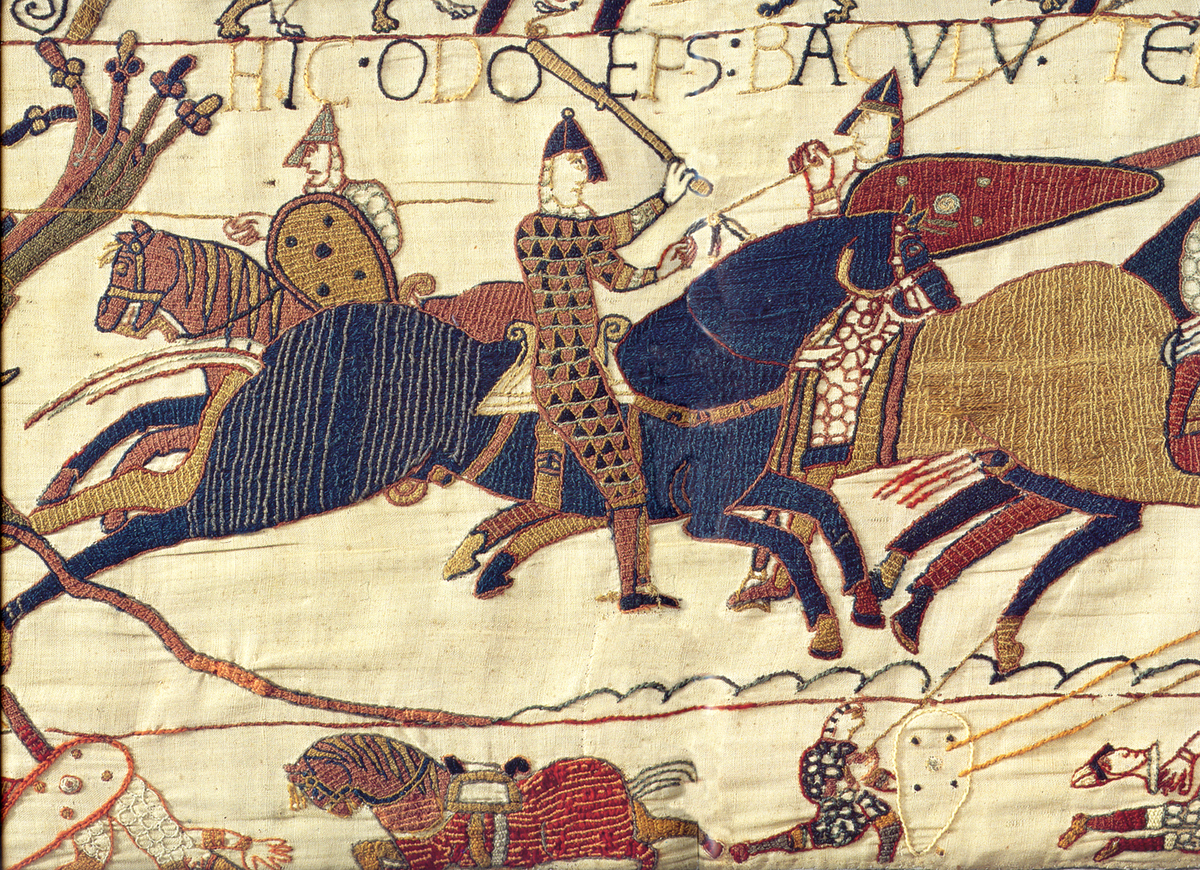 Below is a copy of a letter from Eoin summarising the talk he gave to the Skryne Tuesday Club on 21st January 2020.

Hi, The talk went very well and there was a good turnout.
I don?t have a clear copy but I can outline here for you roughly what I went through.

I brought along several books and pictures and photographs including of my mother and Skryne Castle. I spoke about growing up in Skryne Castle and how my mother had lived there for 50 years, probably longer than any Norman family!

I went through briefly my ? Growing up in Skryne? which won the competition and I referred to yourself and how you encouraged me to enter. I also mentioned other people who took part in that competition including Netta, Margaret Smith/Hayes, and young Louis Murray who won the junior section.

I showed some photographs of Skryne Castle and referred to the Norman ghost there.

I had and illustrated book on the Bayeux Tapestry which I went through and suggested perhaps the Tuesday Club might like to do a Skryne Tapestry and how they had made one in New Ross. I suggested that you, Mary Rose, might help them!  If a tapestry was too complicated then perhaps they might do a film!

I showed a copy of the McAleese picture in the National Gallery of the wedding of Aoife and Strongbow and went through the De Fepoy?s in Skryne and Hugh DeLacy in Meath and I showed maps from my mother?s book of both Skryne and Meath in the 12th century.

I referred, from my mother?s book, to the Seven Manors outside of Skryne; Rsthfeigh,  Timoole, Cushistown, Macetown, Trevitt, Ardmulchan and Tara. Also I spoke about the candlemakers of Candle Hill which my mother wrote about.
I introduced and a new book; Mythical Ireland by Anthony Murphy which refers to my mother?s interest in Rosnaree and fording the Boyne here.
This book also refers to Sir William Wilde?s book on the Boyne and Blackwater, of which I have a copy, published in 1850 and I showed them a sketch of the font which Wilde found at Kilcarn ruined church and had placed in Johnstown Church. I suggested that Mary Wilkinson (O?Brien-Lynch) was probably baptised in this front.

I then referred to another new book given to me recently called the Croppy Boy which refers to the United Irishmen particularly in Meath and Louth and gives a detailed account of the gathering  at Tara in 1798 where hundreds of the Croppies were slaughtered and how 300 of them are buried in the Mound of the Hostages.
I then went on to show my mother?s other books Including;
I Send my Love Along the Boyne and it?s Nano Reid illustrations.

I went through The Green Cockatrice and how some of Shakespeare?s works were possibly written by an Irish noble man?s son and her correspondence with Enoch Powell (which I have).
I referred to some of the pictures of Thomas Cusick?s Memorial stones at Trevet and how these are listed on Wikipedia. I spoke about the stone from  Trevet which was at Skryne Church for many years and now is in Tara church. Most people seem to be familiar with this stone.
I referred to Kileen Castle and The Cusack family and your interest and writings here and how I had worked at Killeen as a youngster.
I spoke about my mother?s books on Saint Finnian and Clonard and the connection between Odder at Tara and Clonard and how Clonard was her final book, printed just before she died.
Finally I referred to the tape recordings that my mother made of various people including Casey Oaks, The Bundy Callaghan from the five roads and Jock Wilkinson. These were made in the 1960s and I have since forward on copies of them to several people who asked for them.

And I finished up explaining that time did not allow me to fully explain our experiences with the Norman Ghost in Skryne Castle and that I would have to leave this to another time.

It all seemed to go down very well, there was a good crowd of about 50 people and they appeared to enjoy it. Certainly I did, it was a good experience.

On September 18th 2017, we lost our sister Caroline. This image shows her obituary in the Meath Chronicle shortly after.

In June 1948 I had the good fortune to be born in the tower room of Skryne Castle. My?mother?said she remembered the huge chestnut tree at the front of the house was in full blossom at the?time.?My very early memories are of my grandmother and aunt living with us ? we were then a?family?of four children. 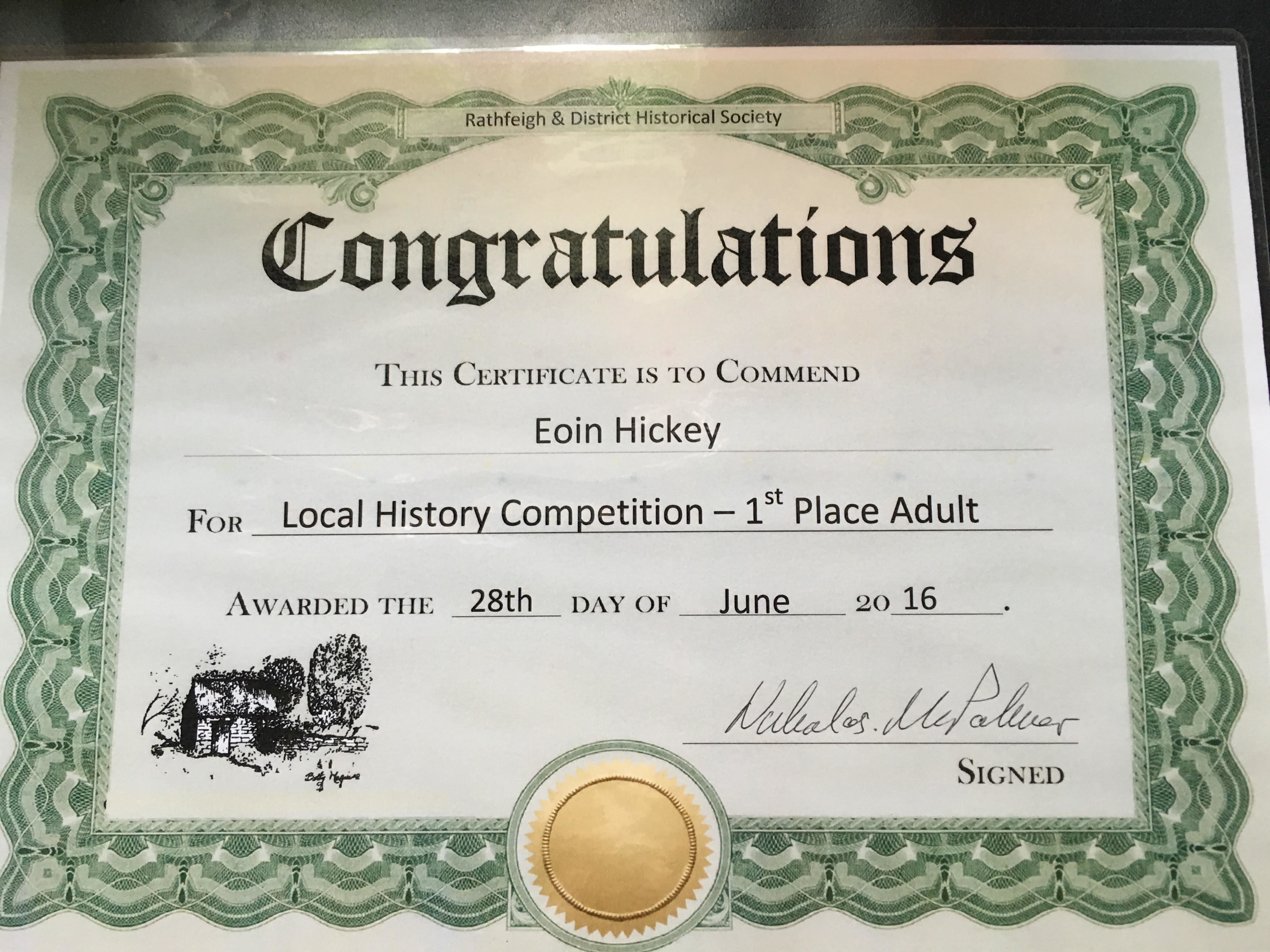 This year the Rathfeigh and District Historical Society held a local history competition asking entrants to submit up to 10,000 words about the local area and it’s history.

Congratulations to Eoin Hickey who was awarded first prize at the Hill of Tara on 28th June 2016.

Below is a link to Eoin’s winning entry.

I hope all is well. I just came across this and thought you might find it interesting. It’s a carpet cleaning company that documented their cleaning process of the tiles and rugs in the castle last November.
https://www.youtube.com/watch?v=9jxM-h9fCOw
Best regards
Hugh

In the Summer of 1968 or ’69 I was marooned in the convent in Stamullen, Co Meath. Kindly Nora & Eoin, who were dating at the time decided to visit me and I begged of them to take me with them. Anything to escape my present enclosure! I was prepared to go on the car rack if necessary so I promised to sit quietly in the back seat and they were free to ignore me!

Anyway off we went and was I glad (at the time I was stationed in California, but was obliged to spend some time in a convent during my stay in Ireland). I remember we stopped off at the beach in Gormanston and took some photos and I still have one of Eoin & myself there. Looking at it now, I think we were all so young … where have all the years gone ? Later that evening we arrived at Skryne Castle and were warmly greeted by Mrs. Hickey.

Nora & Eoin left us to attend a dance in the locality and Elizabeth and I had a most pleasant evening. We chatted about many things and looked at some family albums. Initially, I thought I would be scared sleeping in a castle for the first time! One conjures visions of ghosts etc ! Quite the contrary I was very relaxed thanks to the welcome and graciousness of my hostess.

The following day we set off for Waterford, where Nora was working at the Tower Hotel. In the afternoon of the same day, Nora and I picked up some chicken and had a picnic on the beach. At a later time, I think the next day, Nora took me to the train station where I boarded a train for Limerick. Many years later, I have thought back on the whole event, and realized what I had imposed on my sister and her boyfriend… they must have needed me like a sore head … not to mention burdening her future mother-in law with my presence!

I’m sure I was the first nun to stay at Scryne Castle which was also one of my first outings with Nora & Eoin. I’ m happy to say we have had many more great occasions since then and eagerly await many more times together in the future God willing.

I was delighted to hear from our successors at Skryne Castle and have been in touch with them. Below is a copy of the email I received this week.

“If there is anyone out there who does not have a copy and has a particular interest in any chapter, family, person or place we will be pleased to email them the relevant section.”

Good evening, and congratulation for your website and (re)collection work!

We have a definite interest in the chapter related to Skryne castle, as we have been living there for the last seven years, with our four children….

We did receive you, the Hickeys siblings – was it six years ago (although I have to admit I cannot remember if you were part of the lot, Eoin)? Together with Marie Wilkinson, for a tour of the castle, once renovated. You enchanted us with your stories (about the cold place it was, the big wheel to pump up the water, the green tennis court, and more…)

We would love to read more about this place (so close to our heart) and its previous life, and admire the pictures (like the one on your website!). We are not part of the family, but feel that you definitely share something essential with our children: childhood memories…

In the hope that you will grant us access to this part of your work,

In this chapter we write about our – Robin, Peter, Eoin, Netta and Caroline Hickey – our upbringing at Skryne Castle in Tara, Co. Meath which lasted from 1948 until about 1960.

We cover work and play, winters and summers, neighbours – the Oakes and O’Connell children and the many children who came to stay like the Shanahans, children of Desmond and Mrs Shanahan who were caught up with Dr. Paul Singer in the stamp auctions affair. We remember our school days at Skryne National School, The High School, The Kings Hospital, The Grammer School, Drogheda, Perston School, Navan and St Martha’s College Navan and we include a good selection of photographs.